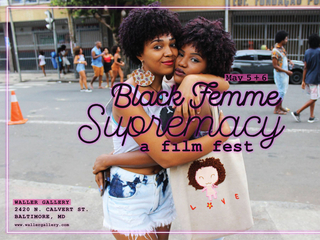 The newly announced Black Femme Supremacy Film Festival puts black femme-identified women into focus, through the medium of film.  MCS Alumna, Nia Hampton, founded this festival.
This event will occur May 5-6 at Waller Gallery during “Drapetomania: The Strong Urge to Escape,” writer and filmmaker Nia Hampton’s first solo gallery show in Baltimore Maryland. More information on her show is at www.WallerGallery.com
“More than anything, Black Femme Supremacy Film Fest is a concept. You don't have to be an institution to screen films! You're film doesn't have to be "perfect" to be screened! We’re not a non-profit or sponsored by an institution. I’m just an artist with a space, a speaker and a projector. And I wanted to see the other weird, sexy and sweet films that I know are out there.”
- Nia Hampton (founder)
Featuring films created by black women of all nationalities and sexual orientations, the weekend will feature over 30 short films, a performance and a closing reception. The festival aims to screen the films that black women have made and haven’t figured out how to show. As well as bring light to the disparities black female directors and artists face.
Presale seated tickets are available now for 13 dollars* per screening block and available on eventbrite: goo.gl/ShhbBu
0 Comments (requires login)